Here we are in Richmond, Virginia, for the North American WKA tournament. The long awaited day has finally come. Feeling good this morning after a good night's rest and filling my tummy the night before. As we're walking to the venue, Kim, one of the trainers at The Wat, turns to me and says: "You have two fights potentially. And oh. They've moved you up one weight class" as she gives this look that says "don't freak out" lol

Hmmm... moved me up one weight class huh? What that means is no one showed up in my division at 132lbs. So now I'll be fighting in the 143lbs division, which is funny because that is EXACTLY what I weighed BEFORE I started cutting weight 3 weeks ago... hahaha sigh... That does not mean all my efforts were in vain people. I now know I can make 132 fairly easily and that will most likely be useful to me sometime in the future. You gotta look at the brighter side of things in life, makes everything a more pleasant experience :-)

So they'll have a couple pounds on me, no biggie. I think I pack a little bit of weight behind my punches too. Being lighter means I'll be faster so it'll work out. To be fair, I had a feeling something like this might happen because there is definitely a limited number of female fighters, particularly in the open division for which you need to have 3 previous wins in order to participate. That was the main reason I wanted to go down to 132 in the first place, just to give myself more options. All is well.

Finally I fought this girl, who I think is from Illinois; she's a good fighter. It's always nice to have a fight where both contestants use good technique and it doesn't look like a bar brawl. The fight went for three rounds, I paced myself, looked for openings and stayed strong until the end. The decision went in my favor, yea! Tomorrow is the final for the belt. I soaked in a warm bath this evening, refueled and now resting up to have my name written in that empty box tomorrow :-D 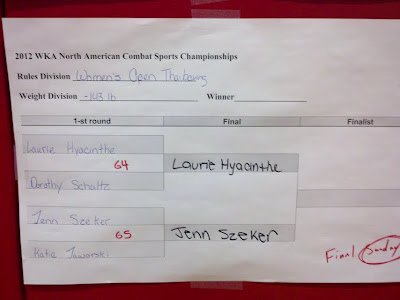