Day 1: this is how it went down

8am
Brackets are finally up. Here's mine: 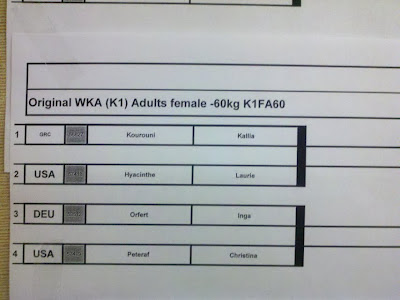 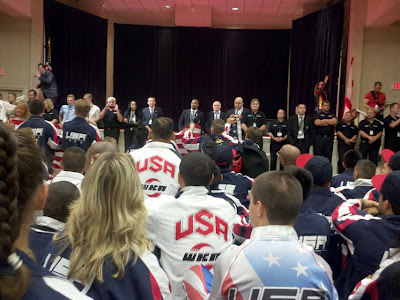 Lots of chanting. "ouussa", "USA" and every country with their own version creating friendly rivalry.

9:00
Championships are officially open.
All women are fighting today. I'm the fifth fight.

11:30
Time for my fight.
Greece vs USA
Greek girl: on the shorter and stockier side
Me: on the not so short or stocky side

We touch gloves. Well, she shoves her gloves in my face and I touch gloves with her. We fight 3 two minute rounds. Can't say it was a great fight. It was close. She's a brawler, constantly trying to land a big swing, which never landed. My plan was to keep her at bay but I didn't even have to try so hard cause she basically ran away the entire fight and when she came close I kneed her.
Long story short: close fight

Decision: Win by split decision for me.
My reaction: happy :)
Her reaction: not happy. Not happy at all. Actually she's pissed. Very pissed.
Drama ensues lol

She actually came after to talk to me, no sorry, to ARGUE with me that she won the fight. So I says to her I says "I didn't judge the fight, it was close, coulda gone either way" I says. She's still talking talking talking.

Moral of the story:
I don't want any more close fights so no Greek girl, or anybody else, can think not for one second that I have to listen to all their yap-yap-yapping after a fight. From now on, when I get into a ring I will leave it ALL in the ring. I get it now.
Lesson learned.
Posted by Laurie at 5:01 PM